Violence, robberies, criminal activities and blatant disregard for fellow human beings is the norm of modern society. We, in America, the last great nation on earth’s history feel secure we can dial 911 to call the protective authorities to ensure that our safety and security is maintained. We rest assured that by calling 911 someone will come to our rescue. Even the youngest child is taught that in time of emergencies.. they can dial 911.

God, the Creator, the One who knows the beginning from the end, sent an urgent message to this earth through New York City when He looked down and saw the wickedness and evil that is escalating in our time.. He dialed 911-01 (September 11, 2001). 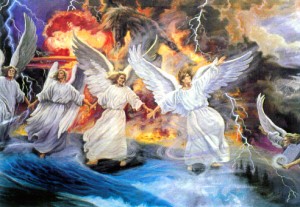 Permit me to stretch my sanctified imagination to say that the call 911-01 is for every single living soul on this planet, who hears the word of God, in this age.. at this time.. that it is high time to “awake out of sleep.”The great God is warning us that it’s time to get ready for His coming. “The attention of the people should be called to the momentous event which is so near at hand. The signs of the times should be kept fresh before their minds. The prophetic visions of Daniel and John foretold a period of morale darkness and declension; but at the time of the end, the time in which we are now living the vision was to speak and not lie. When the signs predicted begin to come to pass, the waiting, watching ones are bidden to look-up and lift up their heads and rejoice because their redemption draweth nigh. (Testimonies for the Church, vol. 5 pp. 9,10)

We must trust the Bible, we must believe in its holy writings. The Bible, and the Bible alone is the sure guide in these perilous times. The Bible, and the Bible alone has predicted all the prophecies of the future and every single one has been fulfilled. In the prophecies of Daniel and Revelation, every single one has been fulfilled to the letter except one…the coming of Jesus Christ. “ We are standing on the threshold of great and solemn events. Many of the prophecies are about to be fulfilled in quick succession…. As we near the close of this world’s history the prophecies relating to the last days especially demands our study.” (Testimonies to Ministers, p.116)

I find it quite fitting, therefore, to proclaim here, not what mere mankind has predicted—Nostradamus, Casey, Dixon and others—but to say exactly what God’s word, the bible, predicted about last day events. I beseech you to read prayerfully and with an open mind what was written for our learning. In Matthew 24: 37-39 Jesus looked down through the ages and warned this end of time generation “But as the days of Noe were, so shall also the coming of the Son of man be. For as in the days that were before the flood, they were eating and drinking, marrying and giving in marriage until the day that Noe entered into the ark, and knew not until the flood came, and took them all away; so shall also the coming of the Son of man be.” “But the days of the flood steal silently on as a thief in the night. Noah is now making his last effort in warning, entreaty, and appeal to the rejecters of God’s message. With tearful eyes, trembling lips and quivering voice he makes his last entreaty for them to believe and secure a refuge in the ark. But they turn from him with impatience and contempt …. They have no patience with his warnings, with his strange work of building an immense boat on dry ground. Noah, they said, was insane.” (Manuscript release, vol.10 p. 374)

Time is running out for this old world. As we look around we can see quite clearly all the signs and evidences that Christ said would tell that his coming is near, yes its even at the door. The choice is up to you where you will spend eternity. I trust that by faith you will accept and believe his holy word for there is no other name whereby you may have eternal life than by the name of Jesus. There must be a better place, there must be a greater purpose than what we are witnessing here today on planet earth. The bible has the answers. Reach out and take it…….you don’t have to dial 911..the choice is yours. Just believe and accept by faith.

The Bible is full of indicators telling us that the world’s end is very, very soon:

KNOWLEDGE: “Never before in earth’s recorded history has one generation witnessed such increase in technological knowledge”. Keavin Hayden. “Truth That Matters” p 38. Daniel 12:4 says.. “ But thou, O Daniel, shut up the words, and seal the book, even to the time of the end: many shall run to and fro, and knowledge shall be increased.”

GOVERNMENTAL/ ECONOMIC: “The current state of world affairs provides sufficient reasons for most people to be concerned. Many who don’t even study Bible prophecy sense that something has gone wrong and that things cannot long continue the way they are.” Keavin Hayden “Truth That Matters” p 39. “The Bible tells us that before the second coming of Jesus, the nation’s governments would begin to counsel together in an attempt to solve the world’s problems. Over the last decade we have heard much about one-world government. Such global political arrangements were predicted in the Bible as taking place near the end of time. When asked by His disciples what would be the sign telling of His near return, Jesus said that “the nations of earth will be in turmoil, and their leaders will be perplexed.” (Luke 21: 25). Keavin Hayden “Truth That Matters” p. 39. Today, as we look around the globe we see clear indicators that the economic structure of the world is falling. Such perplexities were prophesied as end time events.

MODERN SOCIETY: “Nearly two thousand years ago the Christian apostle Paul wrote concerning the intense social problems that would exist in the world at the end of time.” Paul said, “You may as well know this…. In the last days perilous times shall come. For men shall be lovers of their own selves, covetous, boasters, proud, blasphemers, disobedient to parents, unthankful, unholy. Without natural affection, trucebreakers, fierce, despisers of those that are good. Traitors, heady highminded, lovers of pleasures more than lovers of God. Having a form of godliness, but denying the power thereof: from such turn away. 2 Timothy 3:1-5. Without question, such conditions are now a living reality on our world. It is without doubt that the most disturbing evidence that our social fabric is being ripped apart is the low level of respect people now have for those in authority. This scourge can be witnessed daily at all levels of society, the saddest of all, being in the home.” Keavin Hayden “Truth That Matters” p. 42.

RELIGIOUS SIGNS: “Another indicator that we are living in earth’s last days is found in the religious world” The Bible warns us to be very cautious about the result of religious hypocrisy, which is forecasted for these last days. Many religionists only play church, and the power of God’s spirit is not with them. Since it is God’s Spirit manifested in the lives of His true followers that always wins converts to genuine Christianity, the Bible proclaims that these spirit-void churchgoers will one day seek to reform society’s deteriorating morals by restoring to political legislation. It is an established historical pattern that when the church separates herself from the power of God, she turns to the power of persecution through the political state to win her converts.” Keavin Hayden “Truth That Matters” p. 42, 43.

“Here in the end time the gospel message of Christ is to cut people away from the way the world thinks and what the world does…. Satan knows all this, so he tries to deceive those interested in Christianity with a false gospel. He would like to have us believe that anyone who makes any profession of faith without a drastic change in life and thought is on the road to the heavenly paradise. He sends people who appear to believe and teach heavenly truths, but their teachings do not lead away from the world’s practices.” In 1 John 4:1, 5 it says “Beloved believe not every spirit, but try the spirits whether they are of God: because many false prophets are gone out into the world.. They are of the world: therefore speak they of the world, and the world heareth them.” Keavin Hayden “Truth That Matters” p. 123, 124.

All such deception is about to end. The battle between the powers of good and evil in this world is about to consummate. A worldwide crisis will soon come and test the true character of every man and woman to make manifest which side he or she is on. The gospel message of salvation through Christ’s merits alone, which lead to obedience to all God’s commandments will do its work in separating the true followers of Christ from those who merely profess their loyalty to Him.” Keavin Hayden “Truth That Matters” p. 124.

Folks, in time like these we need the Gospel to prepare our lives for Jesus’ coming. Try Jesus today. He can make a difference in your life.