God cares so much for us that in the Bible… Deuteronomy 29:29.. it says “The secret things belong unto the Lord our God: but those things which are revealed belong unto us and to our children for ever, that we may do all the words of this law.”.

In the study of apocalyptic prophecy the main focus is to show the big picture of what God’s intentions and His plans are for us and also to show the final consequences of rejecting or accepting these choices. The apocalyptic books of Daniel and Revelation reveals God’s intentions and plans for us at this time, the End Time. The prophecy begins with the dream by a king of a great image, which outlined the future history of the world in the setting-up of kingdoms and the fulfillment of each prophecy to the very end of time.

Daniel 2" src="http://www.endtimeministry.org/wp-content/uploads/2011/01/dan_2_image.jpg" alt="The metal man in Nebuchadnezzar's dream represents world history from Daniel's day to the second coming of Christ." width="250" height="384" srcset="http://www.endtimeministry.org/wp-content/uploads/2011/01/dan_2_image.jpg 250w, http://www.endtimeministry.org/wp-content/uploads/2011/01/dan_2_image-195x300.jpg 195w" sizes="(max-width: 250px) 100vw, 250px" />The setting is in Babylon where its king, Nebuchadnezzar, had a dream which he promptly forgot by the morning of the next day.(See Daniel 2:29-35). “The king’s dream revealed events that world take place at the end of earth’s history.” King Nebuchadnezzar troubled thoughts could not fully understand the meaning of his dream. However, Daniel, God’s prophet, through the guidance of God’s Holy Spirit, revealed the true meaning of the king’s dream. The Bible states in Daniel 2:37-44….

The kingdom of Babylon ruled the world from 605 to 539 B.C. Under Nebuchadnezzar the Babylonians worshiped one god more than any other, Bel-Marduk, made out of solid gold. It was surely a delight for Nebuchadnezzar to understand that the gold of his Babylonian Empire was represented by the statue’s head. You see, Nebuchadnezzar was the power-house behind the Babylonian kingdom. But Babylon would not last forever, history can testify to this fact. The revelation says that “after you shall arise another kingdom, inferior to you” Dan. 2:39.

CHEST AND ARM OF SILVER…… MEDO-PERSIA

“In fulfillment of God’s prediction, Nebuchadnezzar’s kingdom crumbled into ruins when Cyrus, the Persian general, overthrew the Babylonian Empire in 539 B.C. ….. The Medes and Persians ruled the world from 539 to 331 B.C.” Focus on Prophecy.-Daniel– pg 12. Kurt Johnson. Voice of Prophecy. No one, but God, could have given Daniel this revelation of the Medes and Persian overthrowing the kingdom of Babylon. Just as, no one but God, could have given Isaiah the revelation, 150 years before it happened, that Cyrus (by name) would be the one to overthrow the Babylonian Empire. You can trust the Bible.
But the Medo-Persian Empire would not last forever, history can testify to this fact. The revelation says “and yet a third kingdom of bronze, which shall rule over all the earth” Dan 2:39.

BELLY AND THIGHS OF BRONZE…………GREECE

In 331 BC Alexander the Great conquered the Medes and Persian Empire. He founded the Macedonian Greek Empire which resulted in Greece being the third great world empire. Greece ruled the world from 331 BC to 168 BC. After his death the Greek Empire disintegrated in a number of Hellenistic Greecian kingdoms. But the Greek Empire would not last forever, history can testify to this fact. The revelation says “ and there shall be a fourth kingdom, strong as iron, because iron breaks to pieces and shatters all things; and like iron which crushes, it shall break and crush all these” Dan 2:40.

Rome followed Greece as the world’s fourth great empire. The Romans, which were heavily influencing the small Grecian Hellenistic kingdoms finally overthrow the Greeks in 168 BC and established the strong and mighty Roman Empire. History says that Roman Empire encompassed more territory and people than any of the empires that preceded it.

“Babylonian, Medo-Persian, Greek, Roman— the list of empires is simple and can be memorized in a moment. Any good history book will confirm the sequence. In Stewart C. Easton’s college textbook, The Heritage of the Ancient World. The table of contents lists “ The Chaldeans and new Babylonia,” “The Great Persian Empire,” “The Greek Civilization,” and “The Foundation of the Roman Empire.” C.Mervyn Maxwell, God Cares, vol. 1, The Message of Daniel, p. 36. The revelation says that after Rome there would be a divided kingdom, part of iron and part of clay. Dan 2:41. In 476 AD barbaric invaders and tribes, north of the Mediterranean, poured down on the Roman Empire, captured it, and divided it into what is today’s Europe.

“There are four empires in the statue series, not five or six. The Roman Empire did not capitulate to a fifth monolithic empire. It deteriorated over a very long period and was appropriated piecemeal by whatever tribal coalition was ambitious enough to grab a portion. France, Italy, Great Britain, the two Germanies, and other nations of Europe are contemporary results of this piecemeal and long-continued process.”

Many ambitious and talented men, even royalties through intermarriages, have tried to unite Europe. Charlemagne tried to do so in the eight century, Charles V in the sixteenth, Napoleon in the nineteenth, the Kaiser Wilhelm and Adolf Hitler in the twentieth.” …Hitler’s main goal “Germany over all [Deutschland ueber alles] ” was counteracted with Daniel’s revelation ‘they will not hold together.’ C. Mervyn Maxwell, God Cares, vol 1,The Message of Daniel, p. 37. My Bible has never failed me in matters of prophecy. It says in Daniel 2:42-43 ..”As the toes of the feet were partly iron and partly clay, so the kingdom shall be partly strong and partly brittle. As you saw the iron mixed with miry clay, so they will mix with one another in marriage, but they will not hold together, just as iron does not mix with clay.” 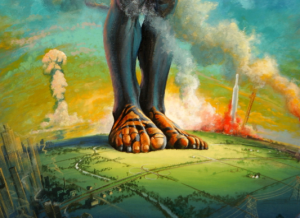 FOLKS, THIS IS WHERE WE ARE RIGHT NOW IN THE “STATUE” OF TIME. “In the days of those kings the God of heaven will set up a kingdom which shall never be destroyed, nor shall its sovereignty be left to another people. It shall break in pieces all these kingdoms and bring them to an end, and it shall stand for ever. Daniel 2:44.

We do not know when Jesus will come to set up His kingdom, but, we know it is soon, very soon. The signs of the times tell us, quite graphically, that Jesus is ready to come. The stone that was cut from a mountain, by no human hand, and broke in pieces the iron, the bronze, the clay, the silver and gold represent Christ the Rock in 1 Corinthians 10:4. that is coming back to bring an end to sin in this time, the End Time. We are approaching a mighty occasion. — the Kings of Kings coming to set up His Kingdom. Soon, very soon, there will be time no more. You have seen the fulfillment of this prophecy by historical events, and like a timetable, each fulfilled exactly on time. Christ’s coming will be exactly on time. Daniel 2:44 says, “the dream is certain and the interpretation is sure.” It is time to prepare to meet Jesus. The hand that guided Daniel many years ago, is willing to guide your life right now. The dying thief on the cross, believed and said, “Lord remember me when thou comest into thy kingdom.” Christ responded by saying “today—I am telling you—thou wilt be with me in paradise.” May the Lord grant us His mercy and His grace as we ready our lives, today, for His kingdom.